The Institut français cultural programme for the FPEU

Members of French diplomatic network / French professionals / Foreign professionals
During the French Presidency of the Council of the European Union (FPEU) from 1 January to 30 June 2022, the Institut français will be working alongside French and European institutions on the one hand and the French cultural network abroad on the other towards the objectives defined by the government for this Presidency. To this end, the Institut français is implementing a series of cultural events and activities that contribute to promoting European creativity by encouraging citizens to get involved in genuine projects.

Events and highlights from the programme

Projects supported by the "European Creativity" call for projects

To help bring the French Presidency to life throughout the European Union and to support the cultural network in its programming around the event, the Institut français has launched a call for projects entitled "Being Creative, the European way!

The theme is based on 7 key words which are the central values of this concept of "European-style creativity" but also the political priorities supported by France in the framework of the FPEU:

The selected projects will be implemented from January to June 2022 and will highlight a concept that is essential to European construction: co-construction with European partners.

The European Night of Ideas

On the morning of 5 March 2022, Café Europa 2022 brings together French and local journalists in the capitals of the European Union to debate the future and freedom of the press. These public meetings are held in heritage cafés, historic sites for the creation of European public spaces and for reading the press. The debates, moderated by young student journalists from each country, examine the technological, economic and political challenges facing the press in the European Union.

A communications kit promoting multilingualism in Europe will be made available at the end of February 2022.

Aimed at diplomatic posts and European counterparts in the EUNIC network, it offers content for social networks aimed at the younger generation to promote multilingualism and foreign language learning in the European area.

Two forums are being held as part of the France-Portugal 2022 Season.

The Ocean Forum is a Franco-Portuguese initiative scheduled as part of the France-Portugal 2022 Season and the French Presidency of the Council of the European Union. The French portion of the Forum is organised by the Muséum National d'Histoire Naturelle and the Institut de l'Océan, in partnership with the Portuguese Ministry of the Sea.

The programme addresses marine issues based on research carried out in France and Portugal, enriched by the most relevant experiences from other European Union countries. The specific Franco-Portuguese focus on the third day of the Forum will be continued in Lisbon in September 2022.

The three main themes for consideration are:

Organised to follow the Informal Meeting of European Ministers of Culture and International Women's Rights Day, this Forum aims to hear experts share best experiences applied at a European level in the cultural, scientific and educational fields. It aims to highlight initiatives to promote de facto equality, giving a voice to women in power to understand the actions and mechanisms that produce results, to identify barriers and to share the beneficial effects of true parity.

Learn more about the France-Portugal Season

Traditionally, EU Presidencies offer an opportunity to install works of art in Council buildings. The Institut français provides assistance to the project owner, SGP EU, free of charge, with its expertise in design and project management.

Following a limited competition, a consortium was selected by a jury, consisting of:

The project is entitled "l’Étoffe de l’Europe™" (The Fabric of Europe) and will form the scenographic signature of the French Presidency of the Council of the European Union.

A collaborative work conceived from the colours of the European nations, Étoffe de l’Europe™ reflects the power of a collective of 447 million citizens who, for 70 years, have patiently woven an identity of their own that is now imposing itself on the world; it strengthens the bonds of a revival that the 27 countries of the European Union are building together and embodies their cultural diversity.

Deployed in several forms and on several scales through the spaces of the Justus Lipsius and Europa buildings, Étoffe de l’Europe™ brings together the digital and ecological issues to which the French Presidency wishes to associate its governance. The Étoffe de l’Europe™ concept has inspired Jacques Perconte and Jeanne Goutelle, two French artists who are weavers in their own way, of digital landscapes emerging from European landscapes in the first case, and screens and alcoves made from waste from the French textile industry in the second.

The French art scene is also represented through an exhibition of works by young artists based in Belgium.

The project as a whole offers a European showcase for the collections of the Mobilier National and the creations by leading French designers and publishers such as Philippe Nigro, Olivier Gagnère, Ligne Roset and Maximum.

The project is exemplary in terms of high environmental standards, reduction of greenhouse gas emissions, eco-design of the materials used and waste management. 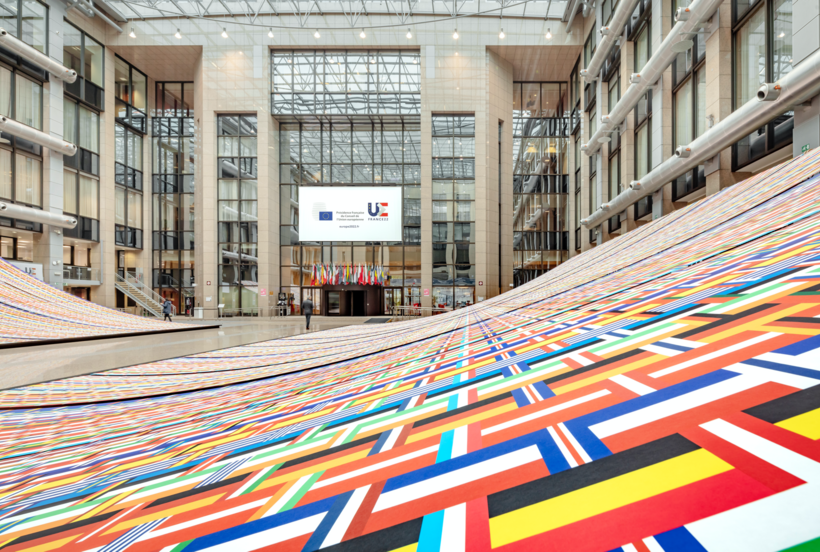 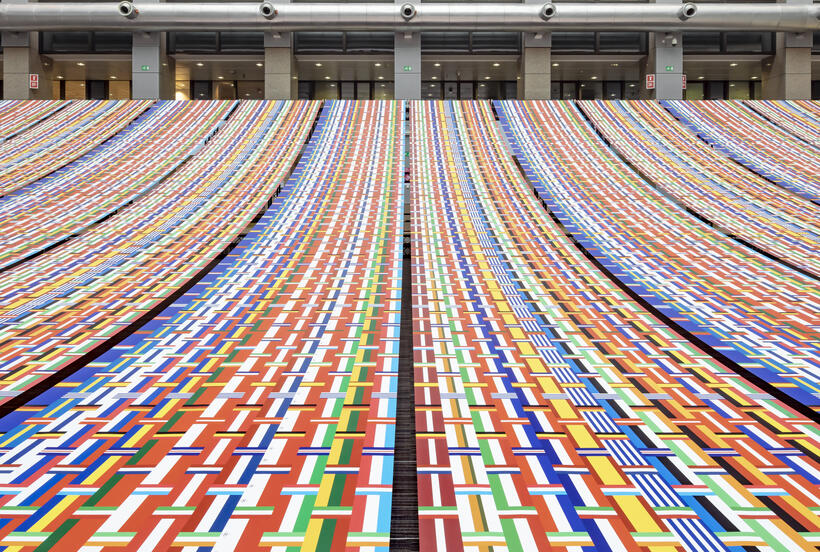 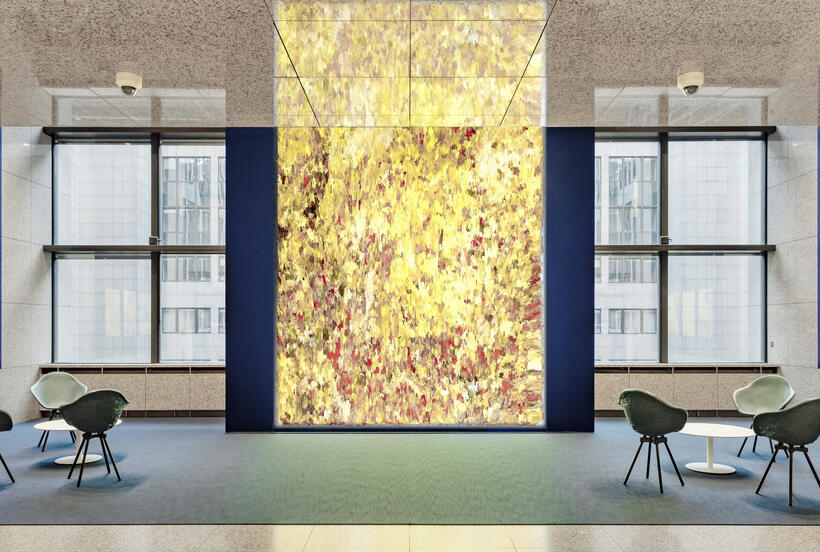 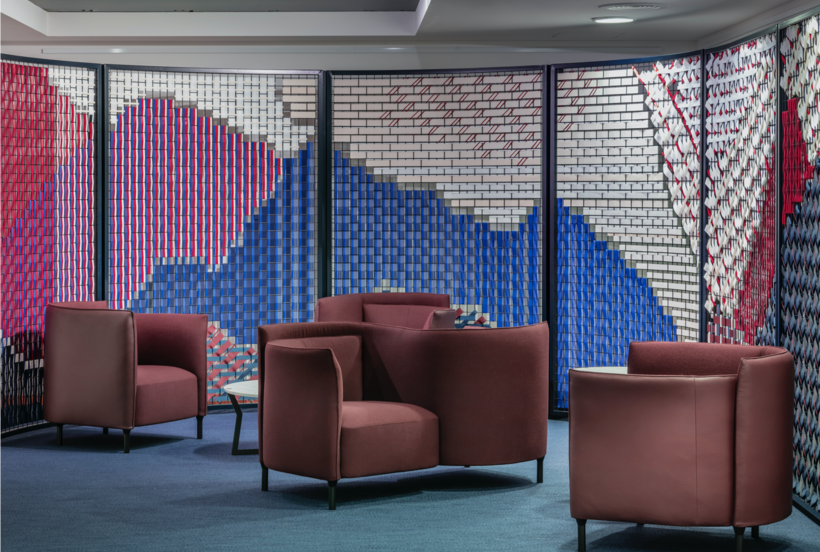 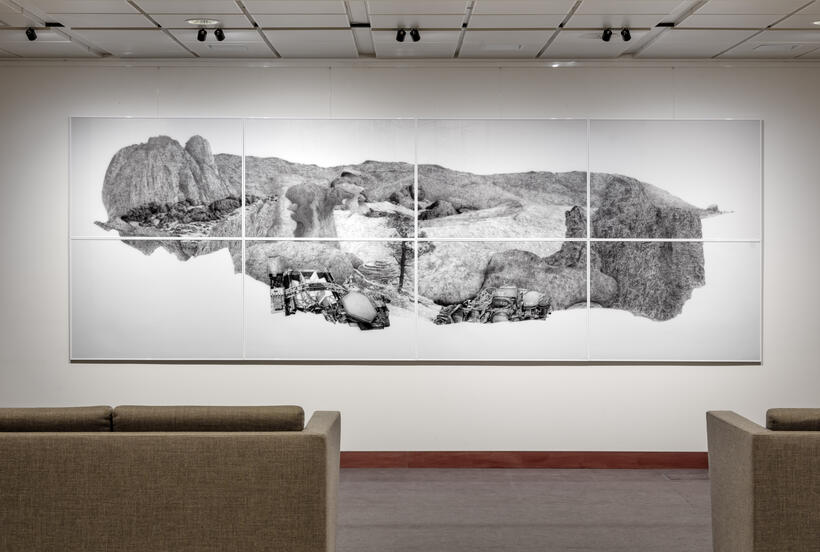 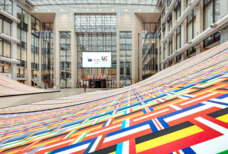 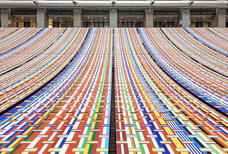 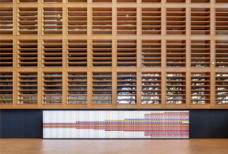 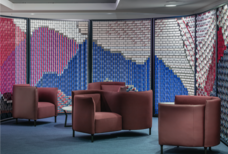 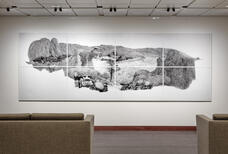 FPEU: the six-month French Presidency of the European Union in 2022
European cooperation at the Institut français